Cushing’s Disease for dogs can be tricky for vets to diagnose because it often seems similar to other symptoms. It’s a disease that could change the daily routine of a dog over the course of time. You may not notice as he gradually loses interest in playing with his toys and other activities. Some owners may think their dog is simply just aging. It can happen at age five or six. For many dogs, it happens in their elderly years. The disease could leave your pup with less hair, a pot belly and no energy. These are just a few of the symptoms possible with Cushing’s Disease. It generally happens to older dogs. Fortunately, there are natural treatments like the CBD dog treats for Cushing’s Disease in dogs available to pet owners. Pet owners may also opt for surgery, medicines or just the holistic approach.

Unfortunately, there is no completely accurate way for a vet to diagnose the mysterious disease besides making a very educated guess on the complete symptoms and overall picture. It can be difficult to get a complete diagnosis for these reasons and treat. It has often been called one of the most misdiagnosed diseases for dogs.

What Is Cushing’s Disease?

The disease was recognized first in a human being by Dr. Harvey Cushing in 1932.

Cushing’s Disease is also known as hypercortisolism or hyperadrenocorticism. This simply means the dog is producing too much cortisol. Cortisol is a growth hormone. It helps the body deal with stress and has many other contributing factors for the body. Healthy adrenal glands produce a hormone called ACTH (adrenocorticotropic hormone). That hormone helps with various systems throughout the body of every dog. It’s also know as the “fight or flight” hormone which can be controlled with cbd medication, this link will show you which are the best products according the reviewers.

When too much cortisol is released by the adrenal glands, it creates problems. A tumor in the pituitary gland or adrenal gland could be the cause of this condition. Elevated cortisol levels will change attributes of a dog. The extra cortisol could also be the result of medication given to a dog.

What are the symptoms?

Dog owners may see an increase in their pet needing water more frequently. A dog that drinks an excessive amount of water could be symptomatic of Cushing’s Disease. A dog could drink 5-10 times as much water as he or she normally does during a given day with the condition.

Dogs with Cushing’s Disease will also need to urinate more frequently. This may be in combination with the addition of drinking more water. A pet may have accidents in the house more often because they may not be able to wait for their owner to return home.

Another symptom of Cushing’s Disease is added weight. A dog might not be able to shed pounds or maintain their ideal weight even with exercise. The other outlying issue is a dog may not have the energy it once had before struggling with the disease.

An enlarged abdomen is common for pets with Cushing’s. Pet owners may notice their dog has an increased belly size. The dog may be eating well but the fat seems to go directly to the abdomen.

The appearance of a dog may change due to symptoms resulting from Cushing’s. Pet owners might notice less hair and a bony appearance with their head.

Hair loss is also typical with Cushing’s. Pets may not completely lose hair but the coat will thin even during colder months when it’s supposed to thicken. This is also a major reason why dog owners get worried about their pet and take a trip to the vet.

A dog may seem consistently out of breath even at rest. The increased panting is a symptom of the disease and shouldn’t be overlooked.

Dogs may seem to have no energy at all. The excess cortisol can certainly shift a normally healthy dog into what appears to be a lazy one. Pet owners may notice their dogs just don’t have the hop in their step they once had.

What are the causes?

A Pituitary gland tumor is one of the most common causes of Cushing’s Disease. It’s generally the cause 85% of the time. The pituitary gland is located just below the brain. This gland releases the ACTH which helps the Adrenal gland manufacture cortisol. The is referred to as Pituitary Gland Dependent Cushing’s.

Cushing’s Disease can also take place after a dog receives specific medication from their vet. These medications may be used to increase cortisone levels.

Stress can also be a factor in Cushing’s Disease. The “fight or flight” hormone cortisol is under consideration so stress can always have an impact on how a dog reacts. More stress could potentially call for more release of the hormone which could have negative consequences.

How is Cushing Disease diagnosed?

Cushing’s Disease can often be missed by pet owners and doctors. It’s difficult to diagnose because the symptoms can potentially mimic many other diseases. Pet owners who are worried their dog might have the disease might opt for a blood test. An ACTH stimulation can yield results letting owners and vets see a more accurate picture. The vet can also do a urinalysis. This test can be the starting point to see if anything abnormal is seen. Getting a proper diagnoses involves seeing how much cortisol is currently in the blood stream. This can gives doctors a greater indication of the presence of Cushing’s disease. There is also a Low Dose Dexamethasone Suppression (LDDS) Test that can be administered. This will illuminate how a dog will react with an artificial cortisol.

How is it normally treated?

Surgery can be very complicated for dogs with Cushing’s Disease. It can be very costly and invasive. The entire adrenal gland will need to be removed. A vet might also opt to remove the pituitary gland through the mouth of the dog using an exoscope.

Medication is also an option with Cushing’s. The drug Lysodren is used most often and isn’t expensive. The unfortunate thing is Lysodren can have very rough side effects for any dog. Lysodren is similar to chemotherapy in that it tries to eliminate the cells of the adrenal gland. The medication provided for Cushing’s is generally prescribed for the rest of the life.

Radiation can shrink a tumor. It generally works better with smaller tumors as opposed to large ones found in the Pituitary or Adrenal Glands. There are side effects with radiation for dogs to endure just as there are with humans. 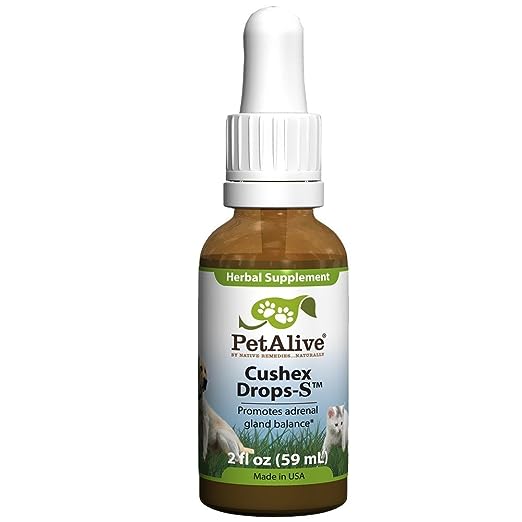 Buy now from Amazon
Pet owners might also try PetAlive Cushex Drops for around $25 per bottle. This is an easy-to-administer home remedy. The drops provide adrenal support when dogs need it most. The all natural supplement can be the difference between a pet suffering from Cushing’s Disease and living a normal healthy life.

The drops also can help restore energy in dogs that are lethargic due to the conditions of Cushing’s. Since everything is natural, there is no risk for harmful side effects as seen in some of the other possible treatments. A natural treatment for Cushing’s disease in dogs might be the best alternative.

The scientific formula of herbs within PetAlive Cushex Drops is designed to fight all of the horrific symptoms associated with Cushing’s Disease.

Dandelion is one of the more popular natural alternatives for treating Cushing’s. It can potentially regulate the adrenal glands and the cortisol production. It also can reduce inflammation. It also lowers blood pressure. Dandelion is also known for improving liver function.

Corticosteroids can be removed with the use of burdock. This is why some opt to use this natural treatment in conjunction with other alternatives for their pets. It also helps maintain proper blood sugar levels.

Sulphur can be utilized with dogs to prevent drinking constantly. Reducing thirst can also help prevent frequent urination. It is also good to prevent the weakness common with Cushing’s.

Astragalus can help adrenal balance. It has been shown to improve immune systems in dogs.

This natural addition for your dog can keep your dog from being extra hungry or thirsty. It also keeps lethargy in check.

Hepar works to fight pain in the abdomen. It also can help your dog avoid infections.

This natural supplement also helps with the potential for thirst. It can also relieve pain associated with an enlarged abdomen and provide energy.

The seaweed has many natural benefits for humans and dogs. It is iodine rich. This means it can help the glandular system remain in great health.

Garlic can help with the immune system. Small amounts can be beneficial. It can eliminate harmful bacteria.

Apple cider vinegar can help your dog with several issues related to Cushing’s Disease. It can help with thinning hair which is possible with Cushing’s. It can also help with digestive help.

Acupuncture is another treatment pet owners may consider for their dogs. Stress can be relieved and a dog could see restored or renewed energy with several sessions. It’s another holistic approach that could be used in conjunction with others. Acupuncture can help regulate the endocrine system. It can reduce any excess inflammation. The only issue is it could be expensive for pet owners and needed on a continual basis.

The use of Ginkgo Biloba slows Cushing’s. The herb can help prevent Cortisol from being produced so rapidly. The Ginkgo Biloba tree has been used for thousands of years for humans and animals. It’s an antioxidant that has been known to help with increased blood flow to the brain. Some consider it an anti-aging herb.

How long will treatment last?

There is no cure for Cushing’s Disease. Treatment is usually administered for the rest of the life for the dog. Medications and natural supplements will need to be utilized routinely. Surgeries may not completely remove tumors. Radiation may only shrink the tumor. Cushing’s Disease will be something the pet owner can minimize for the dog so life is enjoyable.

The results of treatment typically occur within six month of most treatments. The cortisol being overproduced can have a lingering effect. It takes some time for any medication to work and slow the overproduction down.

Cushing’s Disease can be very difficult to diagnose or endure for any pet. Pet owners will need to watch their dogs carefully to see if the existing symptoms could potentially be related to the disease. The unfortunate thing about Cushing’s is many pet owners confuse the symptoms with aging and let the conditions deteriorate. With proper testing, vets can help distinguish the disease from the others it closely mimics. They can then administer a safe course of action to get a dog back on the right track. The pet owner may ultimately choose upon the advice of their vet whether to opt for surgery, medicine or a holistic approach. Natural treatment for Cushing’s disease in dogs can certainly be a great approach.

The Best Dremel for Dog Nails

5 Ways to Keep Your Dog Safe on Hot Days

The Best Brush for a Golden Retriever

The Best Nail Grinder for Dogs

The Best Dog Clippers for Schnauzers

The Best Dog Clippers for Home Use – Grooming in 2020